Apple and Google have joined forces to help governments and health authorities in the fight against the COVID-19 pandemic. They have released the first version of their exposure notification software for both iOS and Android devices. The State of Colorado just announced their participation today, Sunday October 25, 2020.

The tech giants want to assist developers who’re working for health authorities in creating apps that can alert users if they’ve been in contact with an infected person. This is made possible by using Bluetooth to securely share your random ID with nearby devices. These IDs are then deleted after 14 days, which is the above-average incubation period for the novel coronavirus that causes COVID-19 disease.

How to Enable COVID-19 Exposure Logging & Notifications on iPhone

This feature is only available to iPhones with iOS 13.5 and later; earlier phones will not have this functionality. Note that availability depends on many factors including regional support. Go to Settings > Exposure Notifications > United States > Colorado (or your country/state).

Once enabled, public health agencies can quickly inform users if they’ve been in contact with an infected person. With this, they can determine how long the users were in proximity and the approximate distance between their devices using Bluetooth signal strength.

Not all states, countries, and health authorities are using this yet. Here is a page with a current listing of all participating countries.

If you wish to learn more about this feature, the State of Colorado has a very informative page here. This page also includes instructions for enabling this functionality on Android devices. Apple and Google have created an excellent explainer video, viewable here. You can also learn more in general about what Apple is doing regarding COVID-19 on their COVID-19 page.

Want some help with that? Contact Us and together, we can get it done!

Autumn has arrived in the northern hemisphere. That means it’s time again for Apple to release the latest version of iOS for iPhone and iPad, which they have: iOS 14. Last year’s iOS 13 was scandalously buggy on its initial release. Apple committed to changing their processes to make sure that a similarly buggy mess wouldn’t be released in the future, and that seems to have worked. As always, the smaller point releases (14.1, 14.2, etc.) will include bug fixes later on this year and the next, but this release is stable and we recommend upgrading to it now.

iOS 14 includes hundreds, if not thousands, of small but significant changes to the user interface. The result is buttons and screens that are easier to read (especially for aging eyes). Overall, it makes the iPhone or iPad feel simpler and easier to understand and use.

On your iPhone or iPad, go to Settings:General:Software Update and if your iPhone qualifies, you’ll see the offer to update there. Apple says that iOS 14 can run on the iPhone 6s and later, which is the exact same compatibility as iOS 13. Updating typically takes about 15 minutes to download, and another 15 minutes to install.

The number one best change with iOS 14 is that when a phone call comes in, it no longer takes over your entire screen. Instead, you get a notification-style window at the top of your phone, so that you can easily accept or dismiss the call without losing whatever you were doing before the call.

Similarly, Siri no longer takes over the entire screen when you engage with it.

A new security feature included in iOS 14 will display an orange dot at the top of your iPhone or iPad when an app is actively using your microphone. A green dot indicates an app is using your camera. The dots also display in the control center.

A new translate app in iOS 14 is designed for conversations and works completely offline. All you have to do is tap on the microphone icon and the app will translate to your chosen language. 11 languages are currently supported.

With the Voice Memo app, the most exciting feature this year is the new Enhance Recording functionality. This reduces background noise and room reverberation with a single tap. Once you create a recording, you’ll see a small icon similar to the Auto adjustment feature in the Photos app. (9 to 5 Mac has an article describing this feature here.)

Apple has introduced an Exposure Notifications System, which lets public health authorities and governments worldwide help people figure out if they’ve been exposed to COVID-19, and if so, what steps to take next to minimize the spread of the virus. Your state or country may or may not yet support this. You can see which US States support this technology here and which countries around the world support it here.

MacRumors wrote an excellent article, describing this new confidential system (developed in conjunction with Google for their Android devices) in great detail.

Where Can I Learn More about iOS14?

Lots of companies have put out their “best-of” iOS 14 lists and tutorials; here are a few:

Can’t You Make It Any Easier?

Why, yes! Contact Us and we can do the upgrade for you and get you high-flying with this new iOS update in no time!

How Do You Spot a Fake Email?

(excerpted from an article at eero.com)

Phishing – a fraudulent attempt to obtain your sensitive information by disguising oneself as trustworthy – continues to be one of the most prevalent ways for hackers to gain access to your accounts and compromise your identity.

At the end of 2019, over 86,000 phishing websites were discovered per month. Here are six common signs you are reading a phishing email. Here is an example:

While phishers are not limited in who they try to imitate, they often try to copy financial institutions, cloud logins (Apple, Microsoft, Google), or disaster relief organizations. Their goal is an obvious one – to get you to take action on the email. To do so, they inspire a sense of urgency by telling you your funds are at risk, your account is being closed, or some other impending negative action.

Email applications can only go so far to protect you from phishing. Scammers will often buy a domain name similar to the one they are trying to spoof. In the above example, the fisher is trying to imitate acmebank.com. They opted to use acrnebank.com hoping that your eye would be tricked by using “rn” instead of “m”.

In an era where marketing is personalized, it is less common to receive an email with a generic salutation. Most trusted institutions will address you by name, especially when an action is required.

Spelling and grammar mistakes are a telltale sign of a phishing attempt. Reputable companies proofread communications before publishing. Run-on sentences, misspelled words, and odd phrases are all signs that the email is not legitimate.

The aim of a phishing attempt is to collect sensitive information. A common way scammers do this is by redirecting you to a fake online form. The link title and where the link takes you will often be different. It is simple to make a link “look” legitimate.

A more nefarious tactic is to attach infected files that allow attackers to gain a foothold into the system. Instead of simply gaining access to one account, the phisher now has to access to the entire computer. They can use their access to target your contacts from your email address. Common file types used include .pdf, .doc/.docx, and .exe files. However, attack techniques are always evolving.

How you can defeat phishing

Phishers use a combination of social engineering tools to trick you into doing what they want, and many of them are very good at it. Moreover, many of them target retirement-age individuals, who tend to trust what they read more than younger people do.

If you receive an email that looks suspicious, contact us and we’ll happy to take a look at it for you. We are here to help!

Proton Technologies AG, the Swiss company that originally brought us the very secure ProtonMail, has recently released a VPN client, ProtonVPN. What is remarkable about this offering is that their most basic plan is free! Not just a free trial, but actually free.   What is a VPN and why do I need it? VPN… END_OF_DOCUMENT_TOKEN_TO_BE_REPLACED

The “Genius Bar” name may do a disservice to everyday Apple users, scaring them away from fixing their own devices and implying only a “genius” can troubleshoot them. But sometimes, going to the Genius Bar makes sense—especially if your phone or Mac is still under warranty and you can get it fixed for free. The… END_OF_DOCUMENT_TOKEN_TO_BE_REPLACED 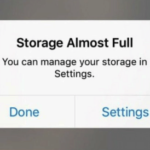 It seems that your iPhone always runs out of space at the most inopportune times. If your iPhone storage is full or nearly full, you’re going to quickly need a way to clear up space on your device. In this article, we will go over some steps you can take to clear space on your… END_OF_DOCUMENT_TOKEN_TO_BE_REPLACED

Have you ever had the experience of someone insisting that they sent you an email, but you can’t find it, only to look later in your Spam or Junk folder and find it hiding there? Now why would your mail app decide one thing is spam and another is not? Email providers like Google, Yahoo,… END_OF_DOCUMENT_TOKEN_TO_BE_REPLACED

You secure your valuables – your wallets, keys, and homes. You know that, if left unsecured, they can easily be a target for criminals. So it makes sense to think the same way about the information stored on all your electronic devices. Computers, tablets, phones and other personal devices hold your emails and your financial… END_OF_DOCUMENT_TOKEN_TO_BE_REPLACED

Apple releases iOS 12 September 17th The folks in Cupertino have been working hard for a year now on the latest software update for iPhones, iPods and iPads. They had some ambitious goals for this release, and not everything made the final release. However, because of the fine-tuning and optimizing they’ve done on iOS 12,… END_OF_DOCUMENT_TOKEN_TO_BE_REPLACED

What can I do about all these robocalls? The most common recommendation from security experts is to simply not answer your phone from numbers you do not recognize. That said, you’re probably still receiving voice messages that are clearly from robotic electronic recordings – robocalls. There are a number of apps you can run on… END_OF_DOCUMENT_TOKEN_TO_BE_REPLACED